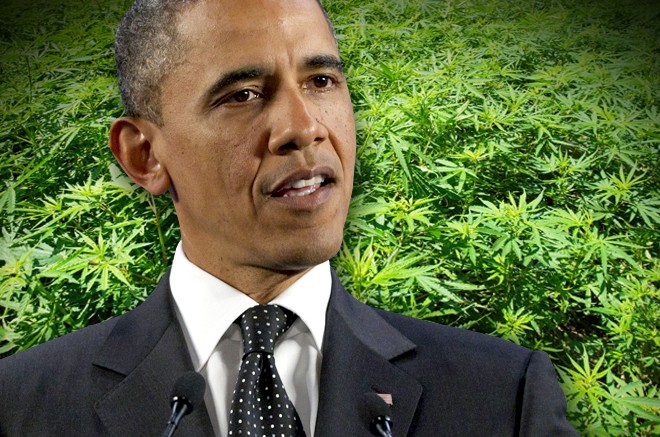 During a series of YouTube interviews Thursday, President Obama demonstrated a remarkably laissez-faire attitude toward marijuana legalization experiments in the states. And he signaled strongly that the Obama administration wouldn’t be taking to the hustings to try to beat back legalization efforts, as previous administrations had been wont to do.

“What you’re seeing now is Colorado, Washington through state referenda, they’re experimenting with legal marijuana,” the president said in response to a question from YouTube host Hank Green. “The position of my administration has been that we still have federal laws that classify marijuana as an illegal substance, but we’re not going to spend a lot of resources trying to turn back decisions that have been made at the state level on this issue. My suspicion is that you’re gonna see other states start looking at this.”

“How can state and local jurisdictions continue to make something legal that is patently illegal under federal law?”

That’s a hugely important question and Don Campbell writing at USA Today takes this point logically further – and I’m very thankful he did. He writes this,

“In December, Congress approved and President Obama signed a spending bill that defunds federal prosecution of medical marijuana sales, yet a U.S. attorney in Oakland continues a campaign to shut down California’s largest medical marijuana dispensary.

“Obama [according to Campbell] has not only instructed the Justice Department to not interfere with state laws legalizing marijuana, he also has even encouraged more states to ‘experiment’ with such laws. So what happens if a Republican is elected president in 2016 and he or she orders a new attorney general to stamp out marijuana wherever it is found?”

That’s an interesting political question, but there’s a huge constitutional question here. The President took the oath of office swearing to uphold the laws of the land. Those laws, at present, include – undeniably – a very clear criminalization of the use, possession, or sale of marijuana at any quantity, for any reason. And yet the President of the United States has not only ordered federal prosecutors not to prosecute cases in those states that have legalized marijuana, but he has also openly invited governors of other states to experiment with their own laws.

How is it possible that a President of the United States, sworn to uphold the laws of the nation, can encourage the governors of the respective states to experiment with laws that violate the law that he has taken an oath to uphold? That’s the kind of question we’re asking in this very strange age. Campbell, by the way, doesn’t seem to be at all opposed to legalizing marijuana, he just thinks the law needs to be clarified and he’s calling upon the Supreme Court to make the clarification. But he also raises a point in his column that deserves some very close worldview scrutiny. He writes, and I quote,

“Doesn’t it just make sense, really, to control and profit from transactions that will otherwise be engaged in illegally by those who have a yearning for pot?”

That’s a rather convoluted sentence but he says, ‘shouldn’t the states basically take tax money and legalize what people are going to do anyway, even if it illegal, simply because they yearn for pot?’ Now, that’s one of those very interesting questions that simply have to be resoundingly answered from a Christian worldview in this way. Every single society decides to sanction, to make it illegal, even to criminalize, some things that other people want to do. You can’t simply make the argument that because people want to do it, and maybe even make the argument that inevitable they are going to do it, and then say that you ought to legalize it, tax it, and profit by it. Of course, even those who are making the argument to legalize marijuana don’t want to take the argument that far. But the point is they want to take the argument as far as the legalization of marijuana – for now. We simply have to ask the question, how long is ‘for now’?

Be the first to comment on "President Obama and Marijuana"